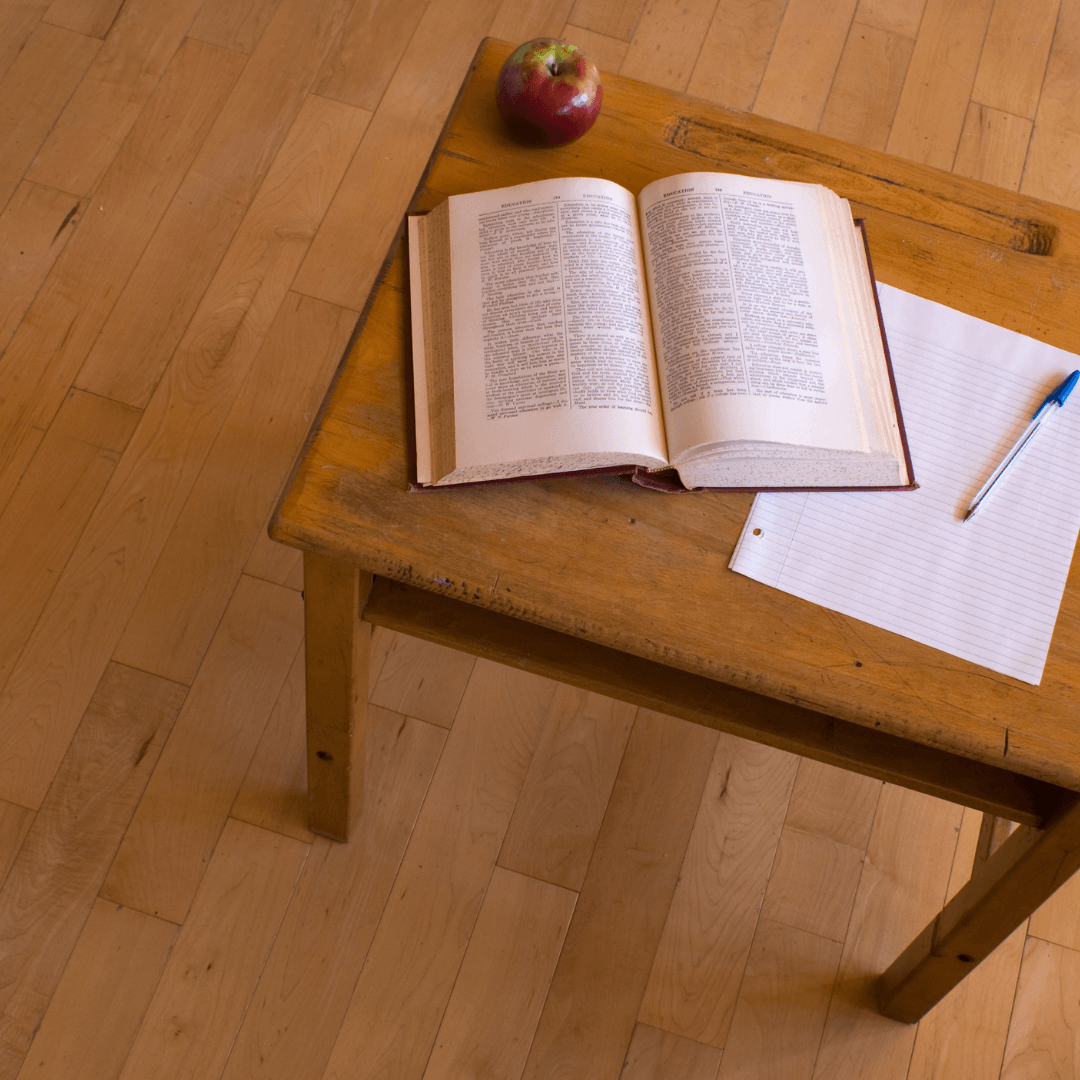 Today we are talking about the history of homeschooling.  I found the preparation of today’s podcast quite interesting and hope you will find it just as interesting to listen to today.  While it may not help your day-to-day, I think knowing the foundation of where homeschooling has come from and where it is going, is important to know as we look at homeschooling in the political world.

Believe it or not, homeschooling was very commonplace in the United States until about the mid-1800s.  In fact, the first 11 presidents of the United States were all homeschooled except for Martin Van Buren.  And while public schools were established in towns of 50 or more families in the Massachusetts Bay Colony in the mid-1600s, the primary purpose was to teach boys to read the Bible not everything else as we see today.

Now before we talk about the history of homeschooling in America, I think it is important to provide a short history of public school, because that is just what it is…short.

Pennsylvania was the first state to make public education free to poor students in 1790, although it was still a tuition-based activity for wealthy families.  At this time the average number of days students attended school was 78, and they were usually home by lunch.

However, by the 1800s, the outlook on public schools was starting to change.  In 1817, Boston began funding its schools with tax dollars, and it opened its first public high school in 1820.  Massachusetts then introduced compulsory schooling laws in 1850.  Other states soon followed such that by 1918 homeschooling was a crime in all 50 states.  By the end of the 1800s, 72% of children ages 5-17 went to public schools, but they only went for 99 short days per year.

The early 1900s brought retaliation against the Catholic Church.  Many groups, including the KKK, strongly supported public schools because they wanted to take away the power of parochial schools in the education of their children.  And that brings us to the first modern historical event in homeschooling.

In 1950, the Green County court of Illinois convicted the parents of a 7-year old Seventh Day Adventist of truancy.  The parents appealed stating that the evidence was insufficient to gain conviction and that the statute was unconstitutional.  After hearing all the evidence and seeing the positive impact homeschooling seemed to have on the child’s education, the court ruled that homeschools could be considered private schools under Illinois law.  This was the first law to oppose the compulsory education laws that had recently spread across the nation.  Nevada soon followed suit in 1956 and Utah in 1957.  However, it would be 24 years later before any other states would consider a homeschool provision.

Before we get into John Holt, who is considered by many as the father of modern homeschooling, let’s recap a few public-school statistics.  One, by the end of the 1800s, 72% of children went to public school for only 99 short days.  Two, by the 1960s, 87% of children were enrolled in public school for an average of 162 days.  Times they were a’ changing, and this is when John Holt came on the scene.

John Holt, a former elementary school teacher and reformer, argued that “formal schools’ focus on rote learning created an oppressive classroom environment designed to make children compliant employees.”  He believed public schools stifled children’s natural curiosity which is why he began an early education reform movement connected with the New Age countercultural movement of the 1960s.  In his call for educational reform, he encouraged parents to “liberate” their kids and dubbed his philosophy “learning by living,” or in terms more familiar to modern homeschoolers, “unschooling.”  He wanted parents to remove the more structured methods of education used by traditional schools and return to a home-schooling environment to help students better reach their potential.

In 1977, John Holt started publishing a newsletter entitled Growing Without Schooling which continued to be published after his death by his colleague, Patrick Farenga, until 2001.  John Holt also wrote Teach Your Own, among other books supporting homeschooling, which was and still is considered by many a foundational book about homeschooling.

Other homeschooling reformers were also publishing books against compulsory education at this time including Paul Goodman, who wrote Compulsory Miseducation, and Ivan Illich, who wrote Deschooling Society.  That said, by the late 1970s, there were only about 13,000 homeschool students in America.

During this time the only substantial ruling against compulsory education was in 1972 when several Amish families went to court against their home state of Wisconsin in which the supreme court ruled that “public schools could not infringe on a parent’s right to a legitimate religious practice.”  While the ruling did set a precedence for the Amish in regards to attendance laws, the supreme court has to this date never issued a more specific ruling for or against a parent’s right to homeschool their own children.

Dr. Raymond Moore held many prestigious positions in education prior to the 1980s.  He had a doctorate in education from the University of Southern California, several years of experience as a teacher, principal, superintendent, and college president both stateside and abroad, and was even employed within the United States Department of Education.

Although friends with John Holt, his faith as a Seventh-Day Adventist and his profession as an educational researcher caused him to take a slightly different look at homeschool education. To begin, he believed that the education of children should be the responsibility of parents for moral and religious reasons. He used research to support his theory that children should be schooled at home until at least 8 or 9 years of age to give them “a firm educational, psychological, and moral foundation.”  His research showed that several disorders including hyperactivity, dyslexia, and nearsightedness often stemmed from overstimulation too early.

His books, Home Grown Kids and Better Late Than Early, caught the attention of Focus on the Family’s James Dobson, who requested Dr. Moore to join him for a two-part radio show in May of 1980.  This interview created a huge homeschooling spark among conservative Christians across the country. While intended for good, several of these conservative Christians took on an antagonistic outlook towards public schools declaring them “Satanic hothouses” and “of the devil.”  This, in turn, caused public school systems, who had previously been helpful to homeschoolers, to go on the defensive. Even so, Dr. Dobson’s interview had given the homeschool movement support and credibility and the movement began to grow.

In addition, thanks in a large part to John Holt and Dr. Raymond Moore, most states had made peace with homeschoolers and provided legal exemptions for the public-school compulsory laws by 1989.  Although Michigan, North Dakota, and Iowa still held out, and although several states required homeschool parents to have teaching licenses, homeschooling had re-earned its credibility among many Americans.

If you have been a homeschooler for any length of time, you have probably heard of the Home School Legal Defense Association or HSLDA which was founded in 1983 by Mike Smith and Michael Farris.  The mission of HSLDA was and still is “to preserve and advance the fundamental, God-given, constitutional right of parents and others legally responsible for their children to direct their education.”

By the time COVID hit in March 2020, the cooking pot was primed.  Homeschooling was booming.  Between 1999 and 2020, the number of children homeschooling continued to grow to nearly 5.4% of the population.

Books like Dumbing Us Down by John Taylor Gatto and For the Children’s Sake by Susan Schaeffer Macaulay gave additional credibility to the effectiveness of homeschooling and/or the lack of effectiveness of public schools.  Book publishers began publishing substantial amounts of curriculum geared primarily toward home learning. Homeschooling parents began authoring helpful encouragement for new homeschoolers such as The Brave Learner by Julie Bogart or Homeschool Bravely by Jamie Erickson.

Thus, in only 12 months following the onslaught of COVID, the number of children homeschooling doubled again to nearly 11% of students in the United States.   It should be noted that this number does not include students who are doing virtual learning or “public school at home” whether by choice or because of COVID lock-downs.

As you can see, the history of homeschooling is changing rapidly.  In the past 40 years, the number of homeschoolers has grown from only about 13,000 to nearly 5 million students and the numbers are continuing to rise.  COVID has opened the eyes of many parents to educational possibilities outside of their neighborhood schools.  As the United States Census Bureau comments following the recent census, “Families are seeking solutions that will reliably meet their health and safety needs, their childcare needs, and the learning and socio-emotional needs of their children.”  In short, parents are finding that their local schools are not meeting their family’s educational needs as once expected and are therefore giving homeschooling a try.

Whatever your reason for homeschooling, I hope you found this short history of modern homeschooling as intriguing as I did.  As homeschooling continues to gain momentum, it is sure to come across opposition so stand strong.  Support your local homeschool organizations.  Show appreciation to your legislatures for letting you homeschool. Together we can continue to change the history of homeschooling in America. 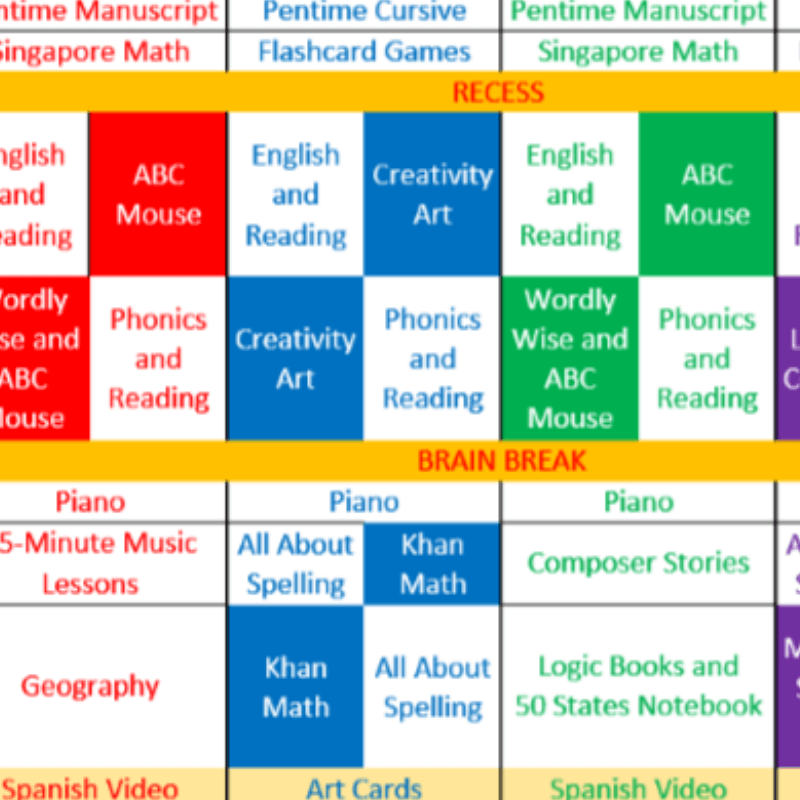 Disclaimer: This post may contain affiliate links. For more info please see my disclosure policy. Still trying to figure out how to organize your homeschool schedule so that it works?  Last year we struggled with our time management.  There never seemed to be enough time in the day to get everything finished we wanted to…

Disclaimer: This post may contain affiliate links. For more info please see my disclosure policy. We have been very excited to get our 2014-2015 year on it’s way.  In fact, we started on July 14th!  I know.  Sounds weird to start school in the middle of summer, but for us it works well because we… 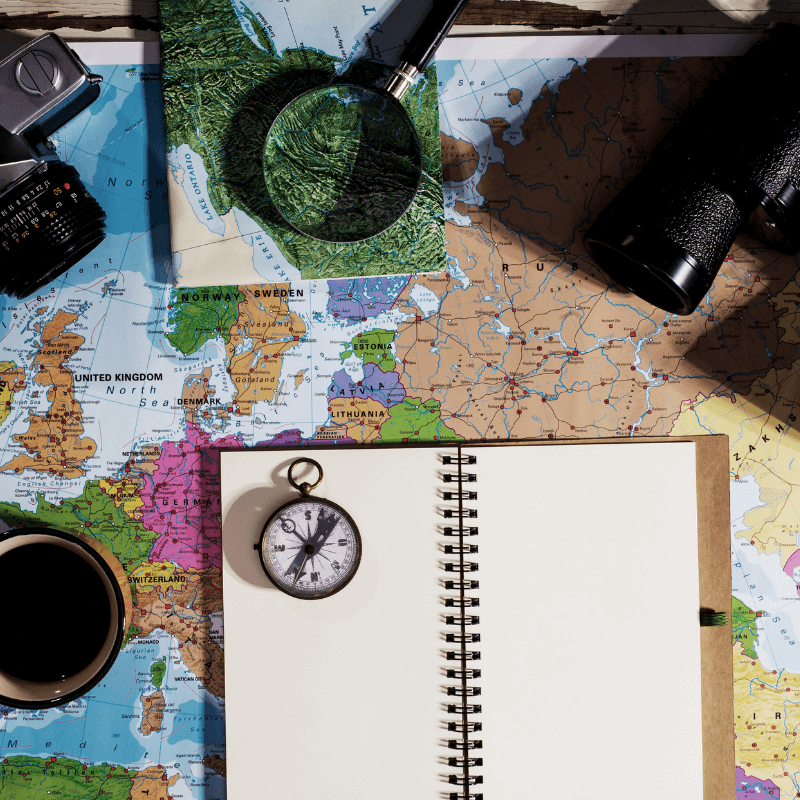 Disclaimer: This post may contain affiliate links. For more info please see my disclosure policy. Two years ago, I began thinking about what I wanted to teach my girls in preparation for their first history cycle.  I knew I want them to have a firm geography foundation with which to understand location as we studied… 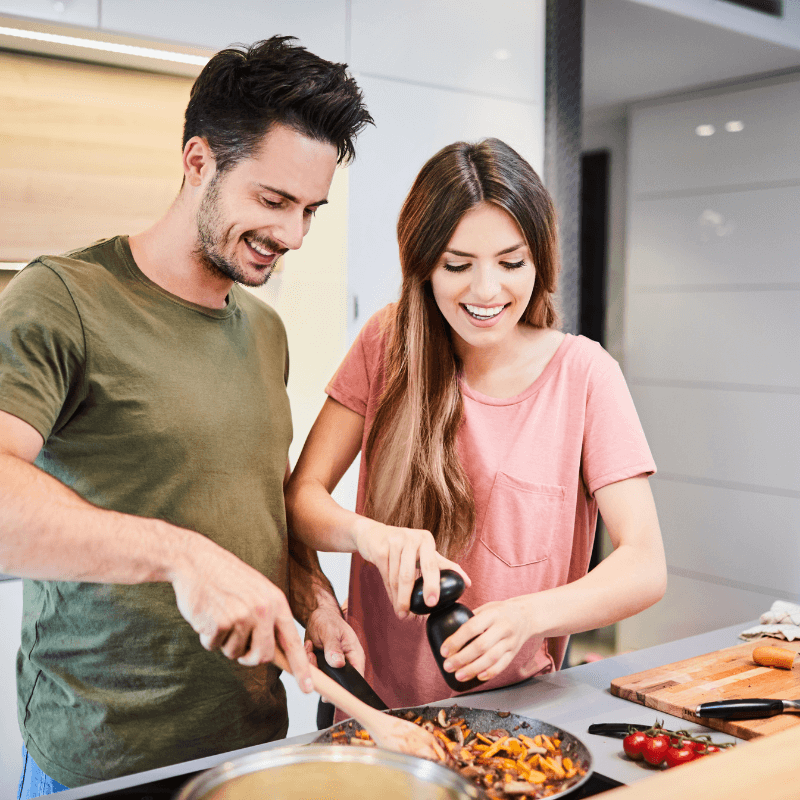 Disclaimer: This post may contain affiliate links. For more info please see my disclosure policy. Thursday is Valentine’s Day!  Can you believe it?!  Yes, it’s the day Hallmark is king and restaurants are filled to the brim.  If you haven’t made your reservations yet, you may be standing for hours at the door come Thursday… 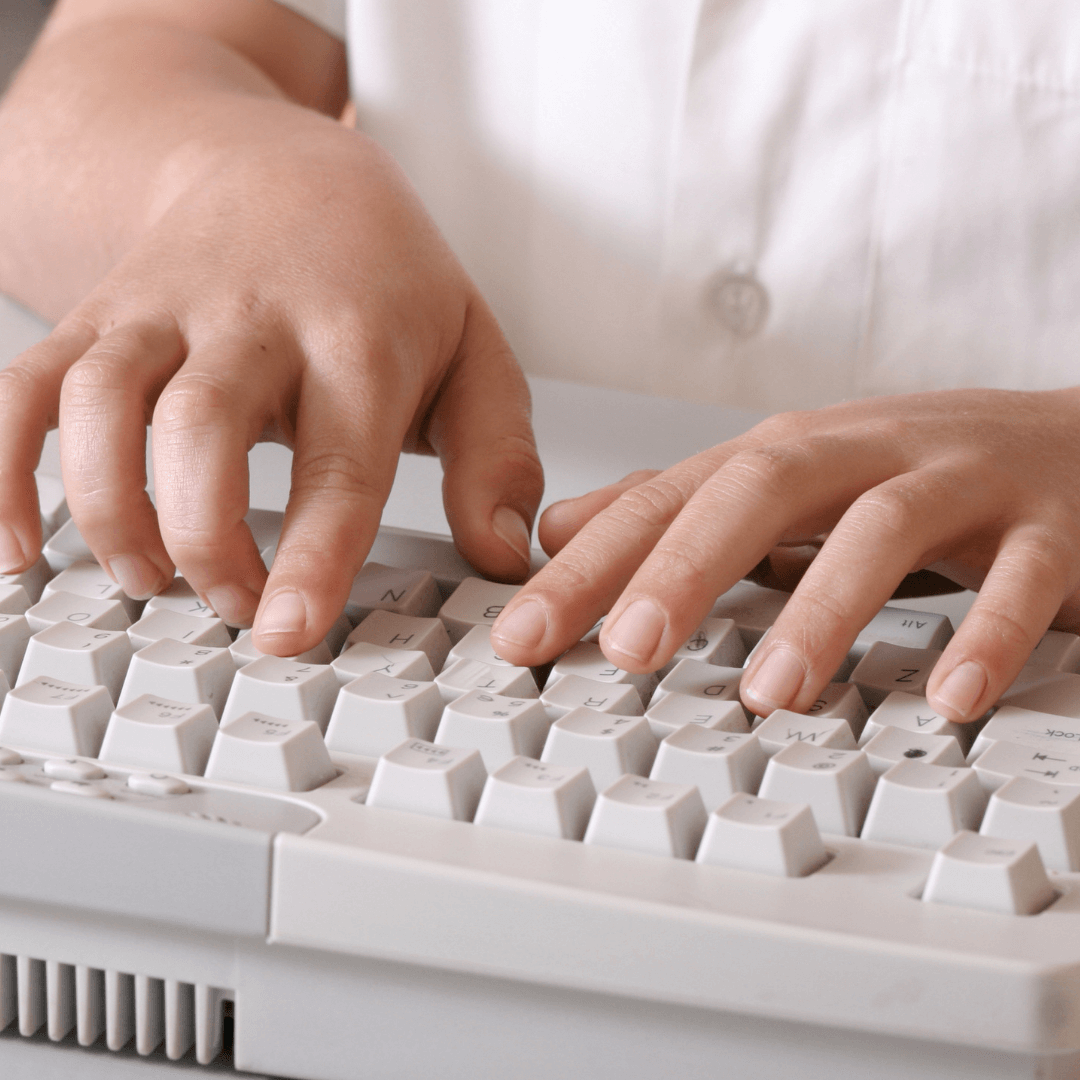 Disclaimer: This post may contain affiliate links. For more info please see my disclosure policy. Typing.  It used to be something secretaries learned as adults.  In fact, typing was a course I took in high school as an elective for fun.  Now days though, we can hardly get by without typing.  It’s one of those…

Disclaimer: This post may contain affiliate links. For more info please see my disclosure policy. Beginning this week I’m teaming up with my fellow iHomeschool Network buddies to share with you 10 things about me in 10 weeks.  Today’s topic:  10 Things I’ve Learned About Myself Through Homeschooling.  I hope you have as much fun…