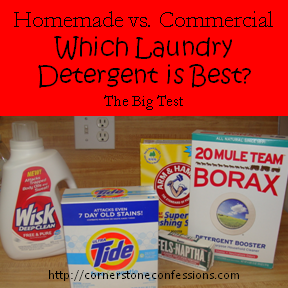 The only thing I did different from Courtney and Trent was that I used only 1/2 cup of the laundry detergent per load instead of a cup because that was all my liquid laundry dispenser would allow. 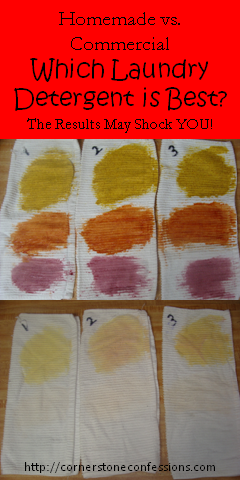 For the experiment, I smeared on a large amount of dijon mustard, ketchup, and grape jelly on three white terry clothes and let them sit for 24 hours.

Both I and my husband then chose our three smelliest, sweatiest shirts to accompany each wash (one smelly shirt per load).  I set the load on “Normal” for each wash on my high efficiency front end load washing machine.

Once complete, each family member smelled the shirts to see which one smelled the cleanest and the dirtiest.  We also compared the stains on the terry cloths.

The Wisk Deep Clean Free and Pure was overall the best stain fighter of the three, although if you look at the original picture, it may have had a slight advantage with a little less intense mustard stain to start with.  The Homemade Liquid Laundry Detergent won out in the odor fighting category with the best smelling shirt.  And the Tide…well this commercial giant didn’t do anything to make it stand out in this experiment at all.

Probably what shocked both my husband and I the most was that the commercial laundry detergents did exactly the opposite of what they claimed.  Wisk claimed to be the best at fighting odors but in the end it was the Wisk shirt that came out smelling the worst.  And then Tide, who claims amazing stain fighting action, actually did the worst on the terry cloth stains.  Even more surprisingly, the homemade version competed very well against these two commercial power houses both in the odor and stain fighting categories.

After this initial experiment I wasn’t quite ready to call a true winner.  Knowing that it is hard to rank which shirts are the smelliest to start with, I decided to try one more experiment before calling the homemade liquid laundry detergent the best.  For a final wash I took all three terry clothes smeared a little bit of homemade liquid laundry detergent directly on the stains and placed them in the washer along with all three formerly smelly shirts.  The result was actually quite astonishing.

As you can tell from the picture, the laundry detergent had a major impact on the mustard stain the second time around.  In addition, all three sweaty shirts came out smelling clean.  It was the first time those shirts had smelled that clean in months.  It was upon smelling the shirts that I was sold.

My conclusion from this laundry detergent comparison–if you can put up with a laundry detergent that occasionally has to be shaken or appears a little clumpy, the homemade version is by far the best way to go cost-wise, smell-wise, and stain-wise.  There is something about the chemical reaction from the cooking and combining of the homemade liquid laundry detergent ingredients that gives it its stain and odor fighting action.  I can’t explain why it works better than the dry laundry detergent recipes or the commercial versions, but I can tell you it works.  So, from now on I will stop second-guessing myself, stick with what works, and enjoy the savings in the process.  And, maybe I’ll save you a few months search in the process too.

What about you?  Have you done a similar laundry detergent experiment?  I’d love to hear your results.

I’m Kathy! I’m the wife of a farmer’s son, homeschooling mom of three girls, and an Okie who dreams of returning to the country life. But above all, I’m a prime example of God’s work in progress.
I’m so glad you are here. Let’s connect! Read more

This life as a Christian homeschool mom is filled with challenges. Let’s face them together. Hi. I’m Kathy. Let’s connect.

*By subscribing you consent to share your name and email so that we can add you to our newsletter list for fresh content and latest releases. Check out our privacy policy for the full story on how we protect and manage your submitted data!

Hot off the Press

And In Case You Are Wondering

Dont’ Forget to Get Connected!

This life as a Christian homeschool mom is filled with challenges. Let’s face them together. Hi. I’m Kathy. Let’s connect.

*By subscribing you consent to share your name and email so that we can add you to our newsletter list for fresh content and latest releases. Check out our privacy policy for the full story on how we protect and manage your submitted data!